* WARNING * Capacitors will explode this week

The government has issued an alert to notify people that aging
capacitors are expected to explode this week. They are not sure why this
is happening at this time, but said that this coming week is the most
likely time that capacitors will begin to explode.

Small capacitors, (less than one inch in size) will explode which will
emit toxic fumes and may cause a fire. Large capacitors can explode in a
manner similar to a stick of dynamite, possibly killing people and
destroying structures.

Electronic devices containing capacitors DO NOT need to be connected to
an electrical source to explode. It's a chemical reaction, and applied
power is not necessary to cause deadly explosions.

If you have any electronics in your home or office, which is likely to
contain capacitors, REMOVE IT IMMEDIATELY. Get it as far away from
homes, and other buildings as quickly as possible. DO NOT DELAY.

The following is a partial list of electronics which contain capacitors: 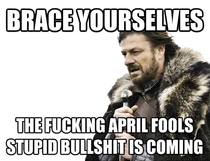 No, I don't think removing my pacemaker would be a good idea.  Nothing
else in the list is inside me, so no need to remove them, either.

Done. All safely at the bottom of our swimming pool now!

Happy April Fools to you too.

...but back in the real world a capacitor is blamed for an exploding train:

Re: * WARNING * Capacitors will explode this week
snipped-for-privacy@dhs.gov wrote:

my CAPACITY for belief of the above is sufficient to store (maybe)
one electron.