Anyone recognise this ancient CRO?

Forums Home
Electronics Down Under
Anyone recognise this ancient CRO?
Page 1

A bloke's contacted me in the hope that I might know something about a
simple oscilloscope his late father built many years ago. It's got a 2"
RCA CRT and only four (octal) valves.

I've uploaded the photo he sent me, to
http://members.ozemail.com.au/~bobpar/CRO.JPG

One of the visible valves looks like it could be a 5Y3G and another a
6J7G. A lot of the visible capacitors look like those yellow Philips
polyester(?) ones from the 1960s but his father quite likely replaced
original waxed papers caps with them.

Does anyone recognise it?

Perhaps it is one of the designs that were in the ARRL Handbook 30 - 35
years ago.

I believe it dates back a lot further than that

have a look at examples from the 30s through to the 50s.
http://www.myvintagetv.com/vintage_test_equipment.htm

Re: Anyone recognise this ancient CRO?

Indeed. I got a start in electronics about 35 years ago and by then valves
had well and truly disappeared from the hobbyist scene (yes, there were a
very few devices still being made using valves, but easily 99% of all kits
and published schematics were solid-state).

I'd say it'd easily date back to the 50s, possibly earlier - though
hobbyists were still building their own oscilloscopes in the '60s, by then
there were far better CRTs available, for likely an equal or lower price
than the older models. This page shows three RCA CRTs which are similar in
appearance to the one used, and all were released during the '40s;
http://aade.com/tubepedia/1collection/tubepedia2.htm

Thanks for the link Don. 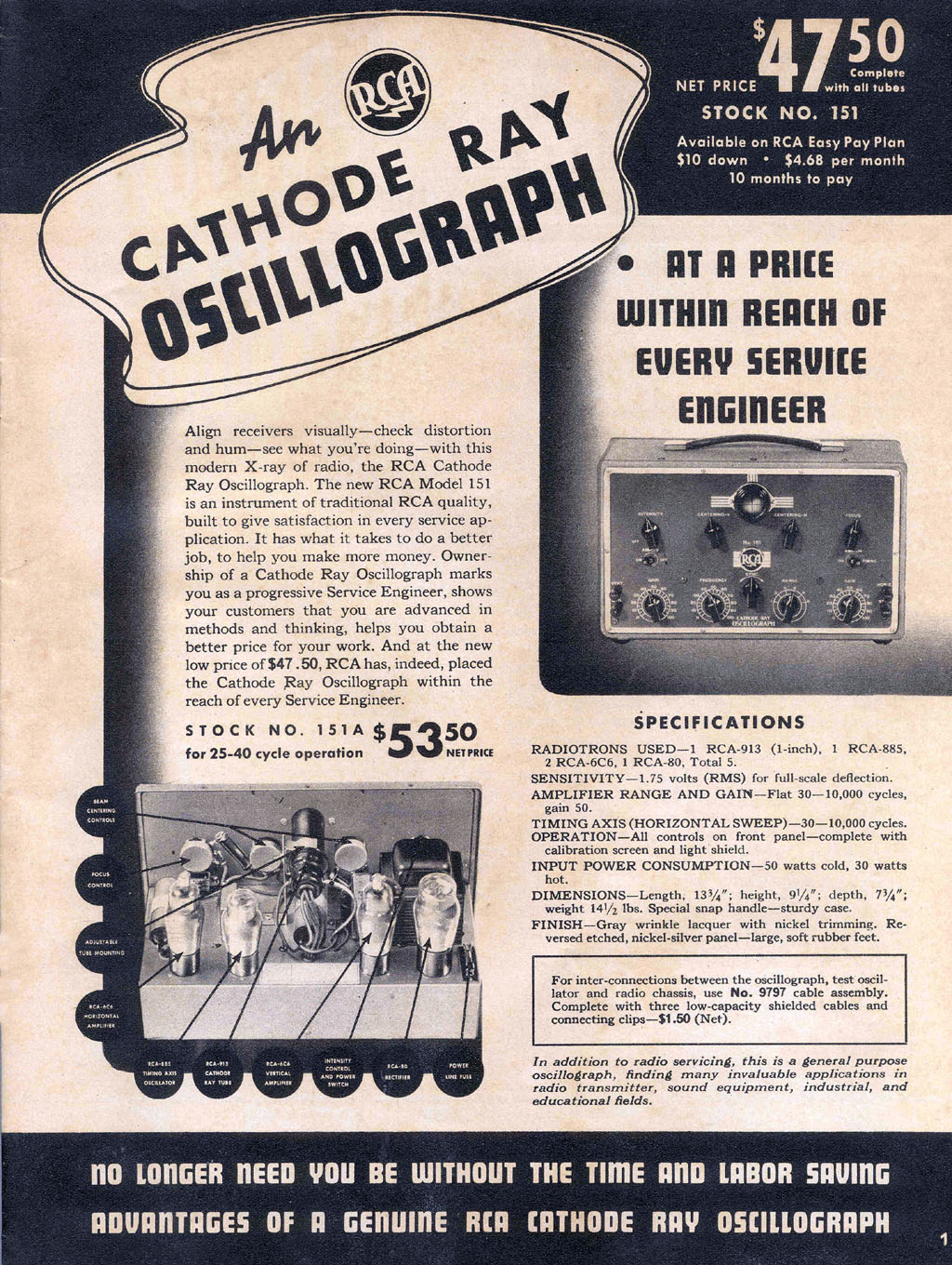 The one in the picture I was sent looks like it's got a 6J7G which has
similar characteristics to the 6C6 + either an 80 or its octal
equivalent 5Y3G, and what looks like a thyratron on the other side.
Quite likely the valve we can't see is another 6J7G.

Maybe this bloke's late father cloned the RCA 151-2 design onto a
chassis he originally made for something else? I wonder where he got the
power transformer from.

Thanks everyone for all your helpful replies. Did you see the specs for
the RCA 151 in the ad?


Things have changed a bit since then. :)

Re: Anyone recognise this ancient CRO?
"Bob Parker"

The chassis looks like something Radio & Hobbies mag could have published
circa 1940  -   then, in the early 70s, it was refurbished with new hardware
& film caps.

The AC tranny must be remote, to keep 50Hz mag fields away from the CRT.

Many details remind me of my own Electronics Australia, 3 inch CRO from May
1966  -  but that has 5 x 9 pin valves, all of them twin section, plus
silicon diodes. It has the same knobs as that black one down the bottom.

** How can you even make a CRO with just four single valves ?

** I doubt anyone alive still does.

Yep less actually, we had to make one as an exercise in our apprentice
scheme. It had a DG7 tube; two EF91s , and a rectifier, possibly a 6X7.
The EHT rectifier was a selenium one. It wasn't exactly a Tektronix.

We would have definitely got a failing mark though if it looked like that.

It starting to look like a chassis that had holes drilled-punched for yet another project, and with the above chassis
components, I would doubt that it was a kit of any description.

Possibly home brew from just a schematic.
I remember buying my first transistor in 1959? so I figure a valve CRO could be anywhere from about 1935 to 1965.

CRO tube could have been war surplus, maybe even an ex radar part.

Re: Anyone recognise this ancient CRO?

I remember seeing several DIY 'scope designs base on WWII surplus
tubes, particularly the VCR139A . By the mid 1960's when I could
afford to build something like that, VCR139As were getting scarce, but
I did manage to find one somewhere, to use in a design from one of the
UK mags. I think is was from PE, the original mag is probably still
buried in a box here, if only I knew which box...

I used the DIY scope for a few years, but when I got some money for my
21st birthday, I blew the lot on a 10MHz Philips PM3200. I gave the
still working DIY scope to somebody else in 1979.

The PM3200? It is now over 40 years old and I still use it
occasionally. Besides the CRT it has one tube, ECC83, which has only
been replaced once. I also had to replace the bridge rectifier in the
power supply, and the BNC socket on the front panel which simply wore
out.

When I was a kid and TVs were rare luxury items, the guy from up the
road who was a radar tech built his own. He used a CRT from a radar
display, interesting picture, bright green and the persistence turned
any moving object into a smear across the screen.

I saw part of the 56 Olympic games in a techs shop window in Williams road Windsor (Vic) on a 5" green ex radar tube.

I remember a bloke in the early 1960s who built a TV using a 5BP1 CRT,
complete with a beautiful black and green picture. Who said we didn't
have colour TV until 1975?

This would have been the late 40s. TVs were fearfully expensive, people
would just buy an antenna to try and make the neighbours believe that
they had one.

Re: Anyone recognise this ancient CRO?
keithr brought next idea :

There may have been amature TV but Public TV did not start until 1956
in Australia.
I Helped install a Training transmitter at Melbourne Tech (RMIT) in
1952 or 3. :-Z

I remember seeing a demo at the exhibition buildings, which would have been 52 or 53.

may have even been part of the same package.

Re: Anyone recognise this ancient CRO?
"John G"

It has no relevance to the post he put it under.

As phil has so helpfully pointed out, I wasn't living in Australia at
the time.

I wouldn't have thought so either, but it is possible to make a CRO with
only four valves.

Have a look at the schematic of the RCA 151 which looks a lot like the
one I've been asked about, at 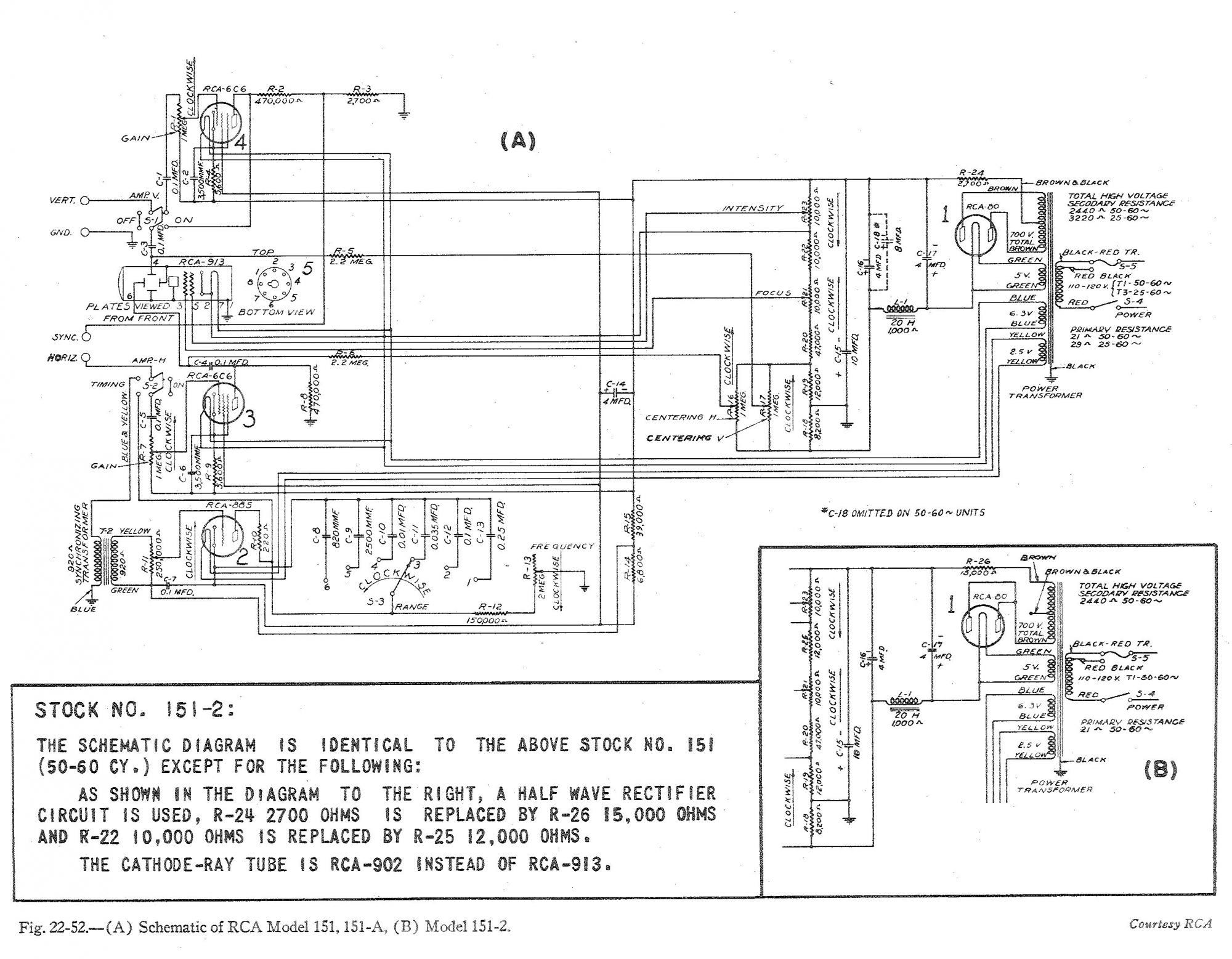 Re: Anyone recognise this ancient CRO?
"Bob Parker"

CRT plates near ground or grounded with the cathode linked to the floating
6.3V supply  ?

Most CROs have high, negative voltages applied to the cathode, but this is
whacky.