We sometimes have a "quiet" power pour on a pc board, like +3.3Q.
Ideally is has its own LDO from +5 or something.

But sometimes we just add a lowpass filter from, say, +3.3V to +3.3Q,
and that tends to be a ferrite bead and a biggish cap. That's not very
scientific, and the bead inductance can resonate with downstream
capacitance if the load current wiggles.

Supply ripple changes gate and FPGA prop delay, which is jitter in our
world.

I was wondering the intent behind your test config for this RLC filter.
1. What does the R=1 simulate? Doesn't that unload the LC resonance of
~10kHz

2. Why drive with 0.1 ? voltage source ~ 1kHZ square wave then capture
with 1M? DSO?  Wouldn't it better to use actual ESR of regulator for DC
source and use a current pulse pump to simulate dynamic CMOS loads.

3. Would it be better to use an AC coupled 50? termination in the DSO to
look for ripple above the SMPS switch rate or LC resonant frequency
since this is where load regulated noise comes from in an LDO?

R=1 kills the resonant Q a little. It's not simulated.

That shouldn't matter too much. My big concern was resonance, and this
combination looks pretty good. The regulators and loads could vary a
lot.

Regulators generally have mediocre high-frequency loops, so we rely on
output capacitance to keep things stiff at all but low frequencies.

A more compulsive test would combine a specific regulator (switch or
linear) with a filter, and test the load transient response at various
base loads. That could become a project.

I wonder if just a regulator and its output caps ever parallel
resonate. Probably so, maybe often.

I've done some load transient testing with LM317 types with ceramic
output caps, and they do ring pretty good after a load step. I posted
that a while ago, with a fix that seems to work.

Yeh, at what frequency?  Ferrite beads have a diffusive characteristic,
i.e., Z ~ sqrt(F) over a substantial range.  By Kramers-Kronig, that's
equivalent to saying X_L = R, or Q = 1, over the same range.

Real parts vary above and below that curve, of course, and so the Q follows
the slope.  Q generally stays low, so it doesn't matter much.  It's not like
you can make them resonate any sharper than the Q.

Q generally peaks at low frequencies, above the L/R time constant set by DCR
+ asymptotic L, and below the core loss curve.

And, at what bias current?  Ferrite beads saturate typically by 1/20th or so
of their DC current rating.  Laird is one of the few that provides bias
curves; I don't bother with anyone else.

Easy solution: make a nice, clean CLCLC, and put damping on either end to
keep it well-behaved under load conditions.  At each end, an R+C provides
parallel termination resistance, and a series L (optionally L || R) isolates
that termination from the source and load.  So it overall looks like:
L(R+C)CLCLC(R+C)L

With good layout and component choice, and shielding to exclude radiating
fields, this many stages should be good enough for practically unlimited
attenuation (>100dB) at high frequencies, and can always be extended with
larger values and more stages for lower frequencies.

I made a particularly nice CDN, LISN, bias tee, whatever you want to call
it, with this scheme.  The crossover frequency varies a bit with load
impedance (say in the 10-30MHz range); the Q is never very high, for any
point on the Smith chart. 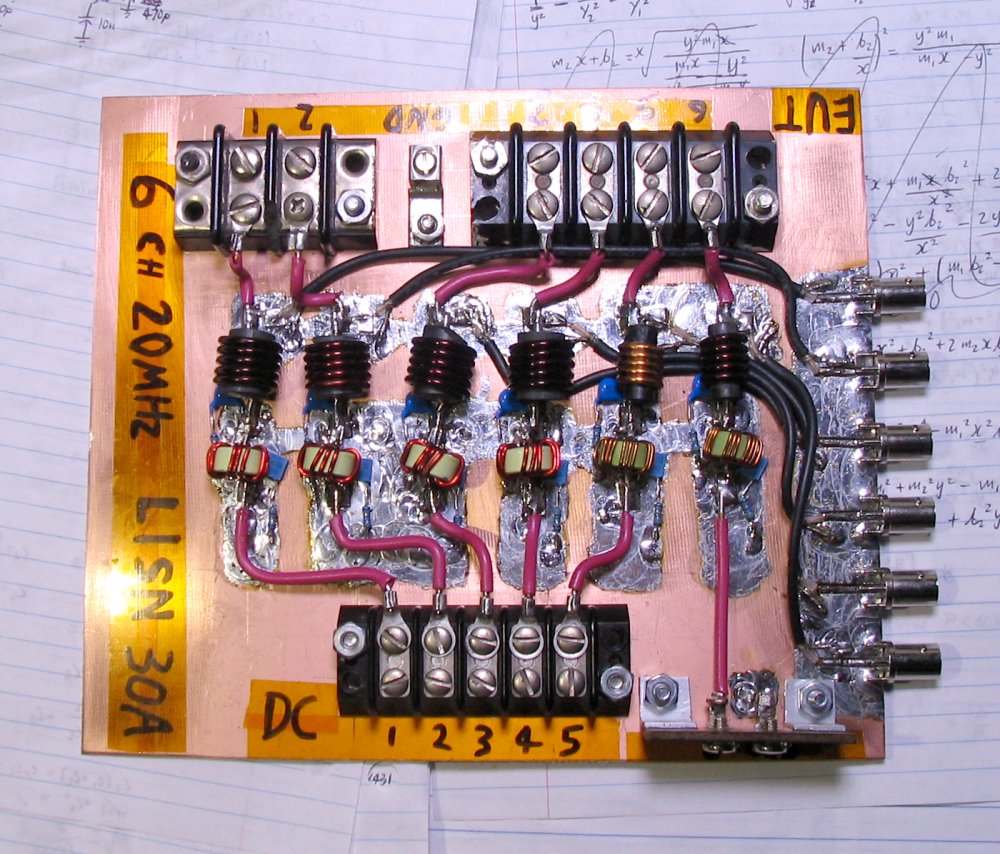 https://www.seventransistorlabs.com/Images/LISN_Built.jpg
EUT side has a coupling cap to 50 ohms; R+C in the middle of two chokes; DC
side stays nice and quiet.


Mind the strays of larger components, which will introduce zeroes in the
transfer function.  No, this does not happen randomly or unpredictably,
they're quite predictable.  Just need suitable models.  The real problem is
a lot of models are either overly simple (e.g. RLC parallel or series), hard
to use, or don't model modes beyond the first SRF.  Consequently, you have
to either assume, measure, or guard-band those modes.

Coilcraft provide extensive models, but they use nonphysical elements which
makes simulations difficult or impossible.  Luckily, I'd found a converter
which makes them work in any analysis:
https://www.seventransistorlabs.com/Calc/Coilcraft1.html

I did this experimentally because I don't have a good model of the
bead. And I'd prefer to not add resistance in series with my big cap;
its ESR is nice, around 20 mOhms. To kill Q, I prefer to add a
resistor across the inductor. The bead Q isn't high, which is good.

On my AADE meter, which runs it in the very roughly 500 KHz range, I
think. Pretty low. Inductance is a fuzzy concept.

That's why we buy them.

Beads seem to have pretty good Qs at low frequencies. They behave like
inductors in the roughly 1 uH range. LT Spice has sims of the Wurth
parts, but we don't use them. The correlation of Z-at-100-MHz and
inductance is weak.

I'm not counting on that.

It cuts the ringing about in half. Hardly worth it, but the cost of
the resistor is maybe a penny.

The problem is that the supply current can depend on things out of my
control, namely the customer's timing pattern. If I have any supply
resonance, somebody will find it. And I want to keep it simple. There
are something like 16 supply rails on this board.

The real concern is: does a bead and a cap have low frequency
resonances? Sometimes they do. This combo ain't bad.