I have bought a dock for my laptop (Thinkpad), from the US, which comes
with its own power supply. The power supply accepts 100-240V AC, and is
2 pronged.

However I have found that in Australia, the same power supply for the
same dock, is 3 pronged (grounded).

I guess it's due to different electrical standards, but is there some
sort of safety issue? I wanted to use the US power supply here, with a
simple plug adapter (since it accepts 100-240V AC input).

It is the same with any other Thinkpad power supply too, 2 prong in the
US but 3 prong in Australia for the local version, strange..

** The ground pin is likely not used.

Lots of  Aussie plug pack adaptors and double insulated appliances have 3
pin plugs with  NO  connection to the earth pin.

I see. So even though the Australian plug pack has a "mickey mouse"
socket on it for the mains plug, you reckon that it probably does not
make use of the earth plug.

Except that I cannot find the "double insulated" logo on my Australian
Thinkpad power supply which uses three prongs. 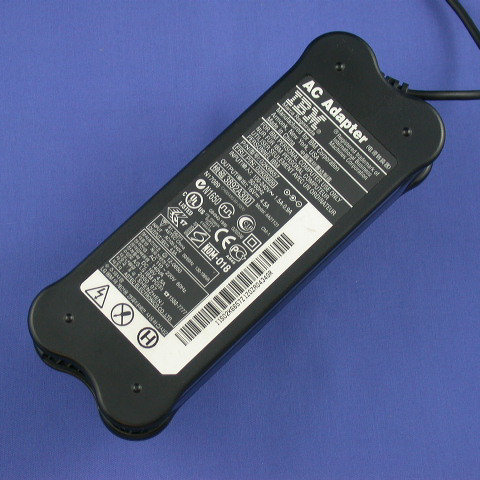 Also, if I take a look at a 3 pong US version (very uncommon) it also
lacks the double insulated logo, like my Australian one
(

Lasly, I can measure 1M Ohm between the earth pin of my Thinkpad power
pack and both of the outpin pins on the DC end.

So I think that the earth prong is being used, but I have little
knowledge with this stuff (in case I'm talking crap).

Hence I wondered why the Australian spec one is (possibly) not double
insulated, and being a bit over cautious, whether it would hurt to use
the US supply here for the long term.. probably not though..

But the US also has 3 prong outlets (at least I thought so).. But if 3
prong outlets are uncommon in the US/Canada, perhaps that is why
IBM/Lenovo does not use 3 prong power packs in the US (or Canada), but
uses them in many other places, including Australia.

The mere presence of a 3 pin plug does not prove an item is grounded  -  as
many counter examples exist. However, the use of  3 pin plug with 3 core
cable and the absence of a double square symbol is good proof that it  IS
grounded.

**  Dunno where  YOU  got the MAD idea that double insulated items are less
safe than earthed  -  the opposite is true actually.

** The troublesome issue with such  SMPSs is  NOT  safety but EMI
suppression.

By using a 3 core lead, the ground conductor can be used to provide earthing
for the low value capacitors that form part of the RF interference filter on
the input ( high voltage) side of the SMPS.  As you found, the DC output
side can then have no connection or earth or a high resistance path (like
1Mohm) to eliminate stray AC voltages.

With the double insulated version, there is no ground conductor available so
the same RF suppression caps are typically connected to the DC output cable
common.  This is sufficiently effective for RFI, but will cause an annoying
buzzing noise if the laptop's audio output is ever connected to an external
audio system.

Also, the use of the old  US 2 pin plug allows maximum convenience to those
users, since quite a number of premises in the USs and Canada still have 2
pin outlets that do not permit a 3 pin plug to be used.

Thanks heaps for the information, all makes sense now..