I've seen some odd data transfer rates when copying large files between a
Windows 7 PC and a Pi, over an SMB share. Instead of a fairly constant
speed, sometimes/usually I got a rate which varied between about 0.5 and 80
Mbps as a sawtooth with a periodicity of about 20 seconds. For an Ethernet
connection instead of wifi, the transfer rate was always constant. 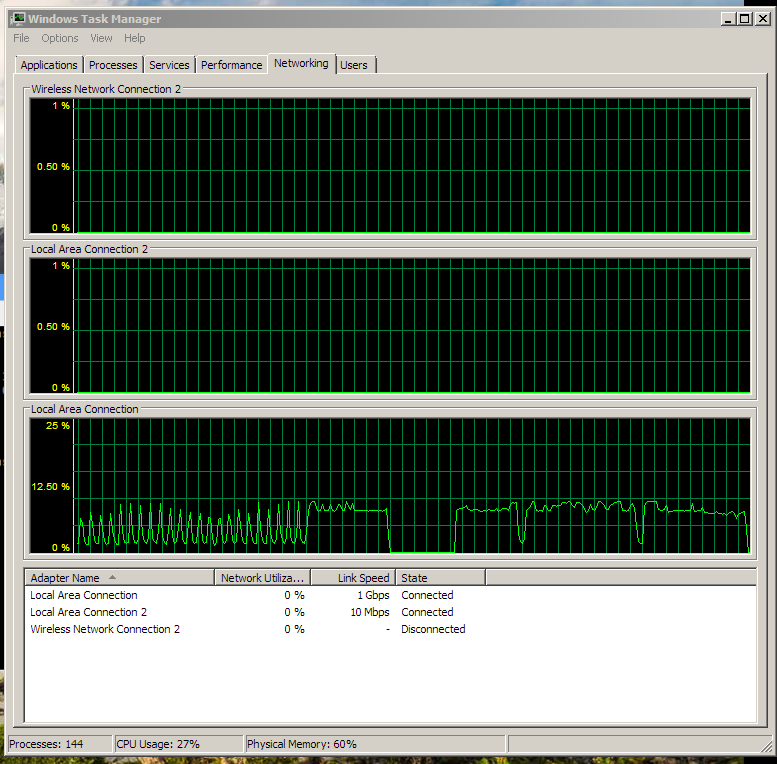 https://i.postimg.cc/Pr51VFhY/5-GHz-constant.pngshows a fairly constant
transfer; also shows the end of a previous transfer which was mostly a
sawtooth, but which spontaneously started running at constant speed towards
end of the transfer 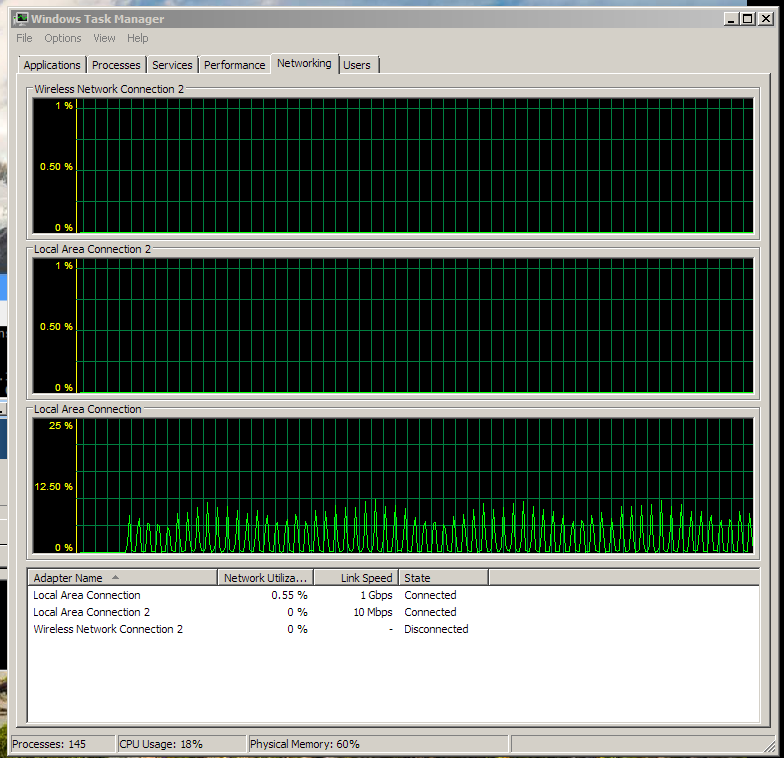 https://i.postimg.cc/26j4pHvs/5-GHz-sawtooth.pngshows a transfer which was
always a sawtooth

Any suggestions as to why it is happening? Is it a wifi "funny" (eg some
sort of interference from a non-wifi source) or is the wifi adapter in the
Pi intermittently behaving oddly? I realise that the Ethernet and wifi
adapters in the Pi effectively go via the USB controller.

The Win 7 was always connected to a TP Link 9980 router by Ethernet, at 1
Gbps speed (as shown by Task Manager | Networking). The router was not
connected to ADSL/VDSL during the test - the phone cable was unplugged.

The Pi was connected either by Ethernet or Wifi, and the Wifi was either 2.4
GHz or 5 GHz.

There were no other wireless networks visible on Wifianalyzer app on an
Android PC. I wasn't using a microwave oven (those sometimes put out a bit
of 2.4 GHz shash).

A USB disk on the Pi was mounted as /home/pi/Videos and shared by Samba, and
was accessible as a drive in Windows (net use r: \win7\pi-share).


I measured file transfer read/write rates (a 1.3 GB file, with the transfer
done as a copy/paste in Windows Explorer) between the Win 7 and the Pi using
the various networking connections between the Pi and the router, always
copying to/from the same SATA disc on the Windows PC.

The Pi and the router were about a foot apart, so signal strength was
strong. And there were no other wifi networks.

Note that only *one* leg of the connection was wifi: the Windows 7 PC was
always connected by Ethernet, to avoid wireless clashes between the two legs
of the connection.

So the Pi is capable, at best, of copying at about 90 Mbps, at a fairly
constant rate, over 5 GHz wifi. But usually the transfer runs much lower,
with just occasional peaks to about 90 Mbps. Over 2.4 GHz, I did not see any
flat-out transfers and the speed varied between 0.4 Mbps and 80 Mbps, for 5
GHz some transfers were flat out and others varied between about 5 and 90
Mbps.

Not surprisingly, best and most consistent rates are achieved with an
Ethernet connection. 5 GHz gives higher speeds and sometimes flat-out
(predictable) transfer; 2.4 GHz is a lot slower because it always spends a
proportion of the time running at well below the peak speed.


The reason I was testing it was to work out whether I could manage with wifi
rather than Ethernet cable or Ethernet-over-mains (powerline) from the Pi
(in one room) to the router and Win 7 PC on the other side of the wall in
the neighbouring room. The Pi needs to be in one room because it is used for
recording TV and that's where the aerial and satellite cables are; the other
room is my study.  Wifi is unreliable and could take ages to copy recordings
to my Win 7 "server", so it will have to be powerline - or else a hole
drilled at skirting board level in the living room wall which will not get
SWMBO approval ;-)

The reported speed on both my Pi and my laptop varies between 1Mbps and
65Mbps. For no change in location of either.

Both use broadcomm chipsets.

disabling wifi and reenabling it on the laptop generally gets me back to
65Mbps.

I am remote from other dwellings in an RF quite place and screened from
other RF by the metal in the house (GPS doesnt work inside the house,
mobile phone is variable).

My general conclusion is that wifi with broacomm chipsets under linux
sucks big time.

It might be instructive to try a USB wifi dongle.

Personally powerline is evil, generates broad band radio frequency
interference. Tell her that the Pi has limited storeage and that if
she wants to watch recordings of <insert her favourite soap/series>
the hole is required.

Or wait until she goes out for half a day and just do it. Only needs
to be a 6 mm hole to get the cable through, check carefully for any
other services hidden in the wall mind. If you have the abilty to fit
RJ45 plugs do that to the free end. Slightly more acceptable might be
a modular networking face plate on a surface box (or plasteboard
flush box if the wall is platerboard) to just plug a patch lead into.
Locate the hole box and cable route so it's out of sight and don't
use a bright red cable...  B-)

Powerline works for one point to point. It sucks big time at adding more
connections

Is it worse than wifi in that respect? I've had fairly good multi-user
performance on powerline, whereas wifi, even with devices right next to the
router, is atrocious on my laptop, my pi and my desktop, especially if more
than one is talking.

Am I right that two devices talking to each other via wifi and the router
(both devices wif rather than Ethernet) will be significantly slower than
one device by wifi and one by Ethernet, because both devices are competing
for bandwidth?

What about wifi extenders (either dedicated or an old router in bridge
mode). Even if there is only one device talking to the router (eg to the
internet), is the performance worse (half?) if the wifi is connected to the
extension rebroadcasted wifi than if it's connected directly to the router's
own wifi?

For an extension network, is the best advice to give the extension a
*different* SSID to the router's wifi (eg "ROUTER_EXT") and to give it a
*different*, non-overlapping channel? I've seen advice to put both networks
on the *same* channel which I'd have thought would cause interference
between the two.

When I tried two devices talking to my server simulatmneously speed
dropped by a factor of about 10. This =was on TP link kit. I assumed
their collision detection was shit.

Dunno, Mi wifi extender is a router wired to ethernet...

Again. I dunno. I put mine on a different channel and different SSID


We've slightly trimmed the long signature. Click to see the full one.

"devices right next to the router" could be part of the problem. The
received RF power levels could be causing front-end overload and
distortion.

I'd presume the two (or more) are using different WiFi channels (there
are only about 3 channels in the 2.4GHz WiFi band that can be used without
overlapping bandwidth). That presumes your "extender" is hard-wired, and
not a WiFi repeater.

Same channel probably expects clients to communicate with which ever
node is the strongest -- without having to change channels. Note that using
different SSID does mean the client has to disconnect from one SSID and
negotiate a connection with the other (and if you are somewhere equidistant
from both, might run the risk of sporadic signal loss/connect cycles).