I was winding up one of my old HP spectrum analysers (my best one, as it
happens, been sitting around unused for years) on the variac yesterday.
Got to about 170VAC from 60 over several hours and just got impatient I
admit it. Wanged it straight up to 240 and *POOF* the all too familiar
magic smoke came out. Patience was never my strong point. So my Sunday is
going to be spent trying to find and fix whatever it was that went bang.
I kind of knew something was in the offing when the display started to
twitch. You know how it is with a CRT tube when it starts winking at you.
Any predictions as to the likely culprit? I'll post back later...

Have a look to condensateur "on" the line first.

You mean the X2 type on the incoming power? Good tip. I shall do so. I've
been kind of distracted on opening the top cover by the sight of soot
over some of the EHT bits, in particular the 18KV line to the CRT anode.
I'll try to post a pic if I can overcome Flickr's barriers.

But I can't see any sign of anything nearby having burned up. <shrug>

You were dialing the unit up in an effort to reform the electrolytic
capacitors, and if you didn't know that before now you do (look up the
term).

Electrolytic capacitors in the primary lower voltage power supply are
the first suspects. I am not familiar with that unit, but there should
be a section with B+ and possibly B- supplies - their filter caps are
suspect. Also check if their bridge rectifiers were damaged, however
that usually doesn't happen when a cap blows up.

Of course there are or should be fuses on the main power bus lines,
check them and replace after finding the culprit.

The pictures suggest that the problem might be in the high voltage power
supply.
That's surely a switcher.
Don't know if the main supply is a switcher.
It's been suggested that you shouldn't try to reform caps by
slowly ramping up the AC input voltages on swtichers.
Disconnect the load side before you reform caps.
Ditto for the switcher that is the HV supply.  It probably
doesn't like having it's input voltages all over the place.

Depending on the competence of the engineer, she may
have considered odd failure modes.  But, if fixing it
cost a penny, there would be resistance from the bean counters.

Point is that people will do stuff outside the spec, like
ramping up the AC.  You can have failure modes that you'd
never think about if you considered only the specified
worst-case conditions.

There may be no obvious cause for a failure caused by operator
error trying to fix something that wasn't broke.

You raise some very good and interesting points here which I shall bear
in mind in future.
So far as the sooty EHT components are concerned, it would seem that
these can arise from a blown component elsewhere within the case; the
smoke particles thereby emitted are attracted to the EHT cabling due to
electrostatics. So quite possibly it's a red herring and there may be
nothing amiss with the CRT supply circuitry at all. It may simply be
evidence of a previously-fixed failure elsewhere.

Are you unfamiliar with CRTs? It's normal for the EHT areas to be covered in a layer of electrostatically attracted dust & dirt.

Older gear with CRTs can have anazing amounts of black dust that has been
attracted to the HV parts.  It can come from local air pollution, just
normal household dust, etc. not necessarily something that burned up.
If you had a major component burn up, then the whole inside of the case
would be black.

So, those black HV wires are not a sure sign of something burning.

The problem is, this may be catastrophically wrong with modern gear with
swtiching power supplies.  Old tube gear could very often be brought back to
like like this.  But, switching supplies are constant power devices, and if
they start up at exceedingly low voltage, they will draw excessive current.
So, one may have to reform capacitors out of circuit on such gear.

Yes, but with a load other than the intended one (say some light bulbs).

It is often a bad idea to bring electronics up slow. Switching supplies
do not like it.  Some of the older tube equipment does not do well
either unless most of the tubes are removed. You can run into what is
called cathode stripping.

If the capacitors need the reforming, many times they will not last very
long after.  The equipment may seem to work ok, but it will often not be
at its best.

Good points about equipment not liking slow power up. I will remember
that in case the question comes up again.

We don't bother with reforming caps at our shop, we run an ESR test, if
the cap passes, great, if it fails, we replace it. Not worth the call
backs otherwise.

The culprit's initials are C. D.

Model number?  I couldn't tell from the photos.

My guess(tm) is the big electrolytic filter cazapitors are shorted,
causing something between the line cord and the caps to smoke.  Smoke
usually means some resistive device burning up, although it can be a
hot trace scorching the PCB.  The color of the smoke would be helpful.
Black is carbon comp or oil, white is plastic wire insulation, gray is
phenolic, brown is epoxy or a dead mouse or insect infestation.  There
are smells associated with each one that is recognizable.  I had a
mouse take up residence inside an HP sweep generator last fall the
demonstrated gray smoke and a horrible stench.  If you can't find the
source of the smoke or smell, shove one end of a 1/4" ID vinyl hose up
your nose, and inhale while moving the other end of the hose all over
the device.  (Yes, I actually do this).  It takes some practice and
fortitude.  For a mouse, have a vomit receptacle handy.  You won't
find any of this in books on electronic repair.

If you're dealing with very small amounts of smoke, that's either
invisible, or pervasive (smoke everywhere), I suggest one of these
airborne particulate detectors:
< 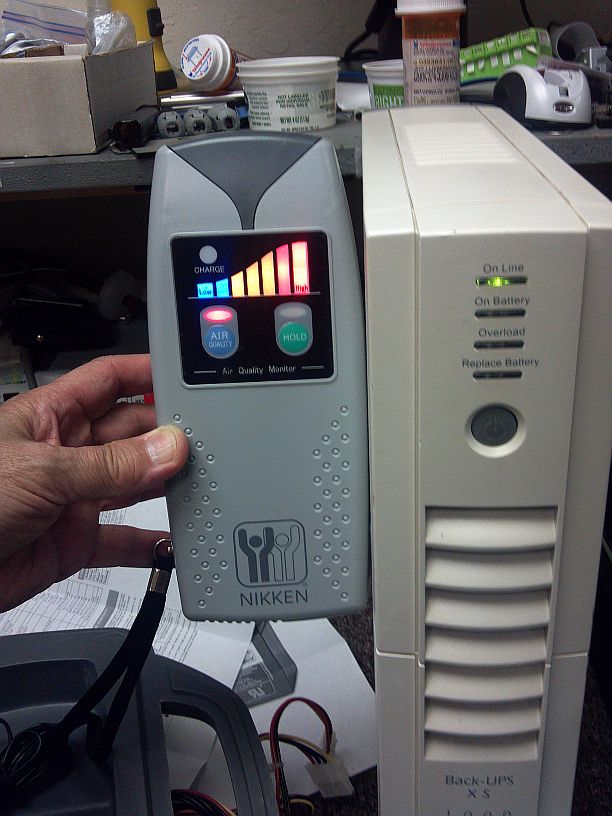 If you have money, consider buying an IR camera.  By IR, I mean heat
as in far-IR, not the common digital camera which does near-IR. Prices
are coming down and you get something reasonable that plugs into an
Android smartphone or iPhone.  If you have a source of heat causing
problems, that will find it.  I borrow one from a friend occasionally.
I've used one with great success isolating a bank of stepper motor
controllers with conveniently exposed power transistors. It was easy
to distinguish between warm normal, too hot, and stone cold.

Thanks for the smoke info and the links.
I bought a Nikken at a garage sale, but never had a manual for it.

<http://www.learnbydestroying.com/jeffl/Nikken%201394%20Air%20Quality%20Monitor/>
The 3 PDF files at the bottom of the directory list are scans of the
user manual.  I do not have a service manual.

Some useful information from a previous thread:
<http://www.edaboard.co.uk/air-pollution-particulate-sensor-package-t532756,start,15.html

There are a bunch of new units for sale on eBay.
<http://www.ebay.com/sch/i.html?_nkw=nikken+1394

The IR camera is one of those tools I rarely need, but it is REALLY
helpful when I do.
I bought the Flir for Android and took it back.
Bought the SEEK and kept that one.

The Flir looks better because they combine the IR and regular
cameras into one picture, but the actual IR resolution is less.
The SEEK uses the camera in the smartphone and you have to swipe
between visible and IR. Problem is that the IR and visible
cameras are typically not along the same vertical or horizontal line
and far apart.  For close work, parallax is a killer.  You can
move the pictures relative to one another for a fixed location, but
if you move, it can change a lot.

There are a couple of things to look out for:
Smartphones must have USB OTG.  For older phones, it's hard to tell
whether it has OTG.
There's an android app to tell if you have OTG,
but I have phones that claim to be OTG, but don't work with the camera.
I tried powering the camera externally without success.
The microUSB sockets can face forward or backward.  Obviously, IR
selfies are not what you want.  Ditto for side locations.  At the time
I looked, there was no way to rotate the image.  I thought I could
use it with the image rotated, but my brain couldn't handle it.
I used one of the Best Buy $10 smart phones they had last year.
Had the side connector.  I built a clip into a phone protective case
and mounted the camera as close as possible to the visible camera
with the correct orientation.
It worked, but the software didn't like my extension cable and locked
up periodically.  I also tried mounting the camera on a flexible
extension so I could use it in an awkward location and still
see the screen.  Same cable problem.  Some extension cables would
not work at all.  Others merely locked up a lot.  That's not an IR
problem, it's a USB problem.  I yelled at customer support, but they
were unsympathetic.  They avoid the issue by claiming that only very
few smartphones are supported.  Maybe newer software fixes that...dunno.

If you get a SEEK from somewhere other than seek, you can't tell what
you're getting.
The original model was fixed focus, and worthless for close up work.
You could buy a close up lens on ebay, but it was $55.
Newer models have a variable focus lens that works very close up.
Problem is that they did it without changing the model number.
The only way to tell is to try it.
There's a second model with variable focus, but narrower field of
view for hunters.  Looks exactly like the others.

One big problem with IR is the emissivity of the surface you're
looking at.  If you put a shiny metal pan on the stove, it looks
cool to the IR sensor...just don't touch it, it's hot.  Trying
to determine the temperature of your shiny motorcycle head is a waste
of time.  That's a whole 'nother discussion topic...

Bottom line, if you have $200 to spend on a toy, the IR camera
is a useful one.  You'll be doing silly things like determining
which of your dozen thermos bottles works best.
Good times...

8566B (this its display unit counterpart)

There was not really any visible smoke to speak of, Jeff. It was
primarily the smell that indicated something had gone phut. Smelled like
toasted PCB, but I can't see any burned areas at all. Might be a
different story if I tore it right apart but so far as I can see, which
is like 90% of it, nothing.
One thing I can say is it's *definitely* not due to any infestation!
Funny thing was, I couldn't detect the slightest smell at all after
removing the covers; it was a very transient event with no noise either.

I shall look into those links; many thanks.

Yes, they're clearly very useful to have around. I'll see what's
available here in the UK.

Sounds very Catholic to this atheist! Maybe time to ask the pope?