I need the part number (the actual code printed on the diode) and the
orientation of a diode on the PCB for a Seagate 250GB drive model number
ST3250620AS.

The diode is actually burnt. I think it is a protection diode and maybe by
replacing it I can resurrect the drive. If anybody has on of these drives
please let me know if you can help. I will supply a photo to your email
address so you can see which diode I need the part number for.

Thanks for you help

Re: HDD failure
I think you'll find that is a monolithic capacitor...simply remove it.

I had a Samsung drive short out this component very recently.
The component was located directly across power and ground.
When I touched the part, it fell from the board.  A small cleaning
and the drive operated as usual.

I'm coming in late to this thread, but I recognise the problem. I
had three seagate drives go on me recently with the same symptoms.

After digging around for details and such and not getting far I
reverted to plan 'B': find another dead (or cheaper) seagate drive
and pinch the diode you need off that. They're oriented in different
ways on different drives, but they all seem to have the same circuit.

I repaired three drives with bits pinched from pretty much random
other drives. They all worked fine.

Re: HDD failure
put finger to keyboard and composed:

Re: HDD failure
Thanks for the replies guys. I managed to fix the drive by removing the
diode and replaced it with a similar one from another drive. The diode was a
protection diode to protect against applying reverse polarity 5V to the
drive i.e cathode to 5V anode to gnd. It was actually cracked open and
burnt.

Thanks again for all you replies

.... In which case it may have been a shunt diode, and should not have
killed your drive unless it shorted when it burned.  Unless you apply
reverse power, it's effectively not there anyway...

You do know that the modern Seagate models have a 5 year warranty? If
the failure wasn't due to you doing something silly like forcing the
power connector the wrong way around then you should be able to make a
claim. Just be aware that they send you back a reconditioned drive
which I presume is a Frankenstein collection of working/within
tolerance parts reassembled into a complete drive.

Anyway, this is more for next time - by replacing that diode you've
probably voided the warranty on the current drive. ;-P

I've had experience with Seagate's worthless warrantees. After I paid
nearly half the price of a new drive to have it shipped to Singapore
to be replaced/repaired under warrantee, the new one failed after just
2 weeks, and Seagate failed for 3 months to answer any form of contact.
Direct phonecalls to the distributors produced nothing, emails were
ignored, even threats of legal action. Nada.

The warrantee in question was 3-fold, 3 months return to the retailer,
12 months to the local distributor, 3 years to Singapore at my cost.
The drive failed at 13 months, as did a very large %age of that model.

Better make that a Maxtor as well since Seagate now owns them!

Your experience is odd, I returned a SCSI 72GB drive after 4 years
of operation.  It was replaced and the unit is in daily operation.  Shipping
to Seagate was at my cost but it was not to Singapore.  Perhaps that is
the nearest to Australia, where as mine was within the USA.

There was a rumour a few years ago that a shipment had been dropped at the
dockside (that was before drives became so shock-tolerant) and so numbers of
drives failed prematurely.

I've also had a bad experience with Seagate. From a purchase of 4
drives in late 2005, all of them had failed by about mid 2007. One of
the reconditioned drives they sent was also faulty out of the box!
Eventually I asked them to replace the set with something more current
as there was obviously something very wrong with that model of drive
(and possibly my setup - although I had replaced the power supply and
eventually all other parts)

Now one of the newer (but still reco'd) drives has failed, I'm asking
for a cash refund equal to the current market value of the drives.
Haven't had much luck so far, their system seems to have inserted my
emails into a ticket system but immediately closed them.

I can't begin to imagine the amount of computer time I've wasted
dropped into DOS so I can run Seatools, doing extra incremental
backups while my array is degraded lest another drive fail and render
it useless, putting up with slow-as-shit degraded RAID5 having to read
from 3 drives just to load a 512 byte sector while I wait for the
replacement to be mailed back.

BTW, the model I had problems with was ST3300831AS (300GB SATA). Do
you have details of the model you had experience with?

Ditto. I've replaced the 4 x 300GB Seagate drives with 3 x 750GB WD. I
had heard bad things about WD but ironically I had 2 x 320GB WD drives
in the same computer that all of the Seagates failed in... they never
missed a beat and they're still in use now.

You can have a bad run with *any* brand HDD.

You can read identical stories about all other brands - only the dates
seem to differentiate them.

I myself had a bad run with IBM drives several years ago.
Had to send them off to Singapore (IIRC)in very specific packaging.

Also, the quality of their warranty processes seem to vary from time to
time as well.

I did have a Seagate fail on me approx. two years ago, and that was
dealt with within Oz, and damned quick too as I recall.

I have a 320GB Maxtor here somewhere with a burned out chip (not a
diode)... one of a batch of six I bought a few years back.

So if anyone thinks they can avoid this sort of problem by sticking to a
certain brand, well good luck :)

But my experience has been 10 Seagate drives without a single failure so
far. One WD drive failed in under a year (replaced under warranty and
instantly resold) And I just bought a WD laptop drive which was DOA, still
trying to get it replaced.

No more Western Digital for me!

That's the problem, everyone has their own little story to tell. ;)
Apart from well known design faults such as the IBM DeathStar most
failures are probably isolated cases which don't necessarily reflect
on the manufacturer's overall quality control.

In this instance, 6 dead drives was enough for me. It went something
like...

- purchase 4 drives
- one never worked. No spinup, DOA. replaced by retailer.
- one reported S.M.A.R.T. errors less than 24 hours later. replaced by
retailer.
... some time in between here ...
- one suddenly developed 99+ bad sectors (99 being the limit of
Seagate's error reporting). replaced with Seagate reco.
- reco made some interesting clicking noises when first powered on and
reported a S.M.A.R.T. event within less than an hour. This was
replaced with another.
... few more months here ...
- one started clicking and generally misbehaving. At this point I went
beyond the RMA system and got someone to agree to send out 4 different
model drives to replace the whole lot. I said that if another failed I
would be asking for a cash refund.
... few more months ...
- one of those started playing up a couple of months ago. Had enough
of Seagate, I just want some cash to cover the cost of the WD drives
I've replaced them with.

No one at Seagate ever asked about my setup or tried to figure out why
they were failing...

BTW my only other experience with failure was an IBM 60GB drive around
2003ish, it wasn't a mechanical failure but apparently some obscure
firmware bug which writes to the disk while the heads are still
seeking across it. Bam, instant bunch of bad sectors and the data is
virtually unrecoverable because it's nuked several sectors on each
track rather than just a relatively small continuous portion. After a
low level format it works just fine but obviously the data is not
safe.

Seagate is the first drive I've used in about 20 years (not that I've
used each of them for that long ;) ) that has failed mechanically.
Just my experience, of course.

My 13GB Seagate drive reported 119 reallocated sectors just before I
took it out of service (because it was growing new defects on a weekly
basis):
http://www.users.on.net/~fzabkar/SmartUDM/13GB.RPT

I think the figure of 99 you are referring to may be the "normalised"
value, not the raw value. I believe my 13GB drive would have been
allowed to develop several thousand bad sectors before its S.M.A.R.T.
status would have been reported as bad.

99 was the value reported by Seatools during an extended test - and it
increased from 0 during the test - so I presume it's a count of
sectors with unrecoverable errors during that scan, rather than
sectors which have been quietly reallocated by the firmware. The
likely reason S.M.A.R.T. didn't kick in is because it happened very
suddenly. Things were fine then suddenly I could see my HD light
getting "stuck" as if it was having problems reading from a drive.
Unfortunately my RAID software does not provide any diagnostic tools
to show which particular drive is playing up, so the only choice I
have is to drop into DOS and run Seatools on all drives. Takes a while
when you have over 2 billion total sectors to scan.......

Re: HDD failure
Here's the diagnostics on the dud reconditioned drive that Seagate
sent me 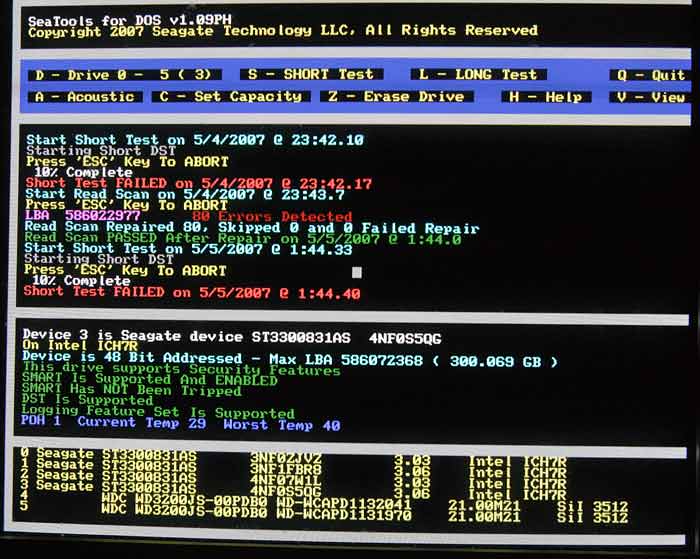 Shortly after this I rebooted and the drive reported a S.M.A.R.T.
event.

Note "POH 1" which means it's only been powered on for a total of 1
hour! (Not entirely true, since it's a reconditioned drive the
mechanicals could have been run for who knows how long. The firmware
was just reset to 0)

This was a replacement for a faulty drive and it turned out to be even
worse... may as well have just kept the first one...

Here is the log for my 13GB Seagate drive:
http://www.users.on.net/~fzabkar/Smartctl/13gb.log

Yeah, I'm aware of smartctl, but unfortunately the Windows RAID driver
presents the array as a single SCSI drive. Have tried many diagnostic
utils with the same result. It's likely that even in another OS (such
as *nix) there may still be issues with detecting and reporting data
for individual drives. The only other thing I can think of is to buy a
standalone PCI SATA card and selectively swap drives between the
onboard RAID and the standalone SATA controller, but doing so will
invalidate/degrade the array, requiring rebuilding between each drive
swap. May as well just do the Seatools tests...

On my FreeBSD servers I'm moving over to software RAID1, which has the
advantage that every HD util can still see the individual drives. I've
run smartctl there. (Easy to see if a webhost is using second hand
drives!)