but I think that's a misprint, looks more like 15MHz: 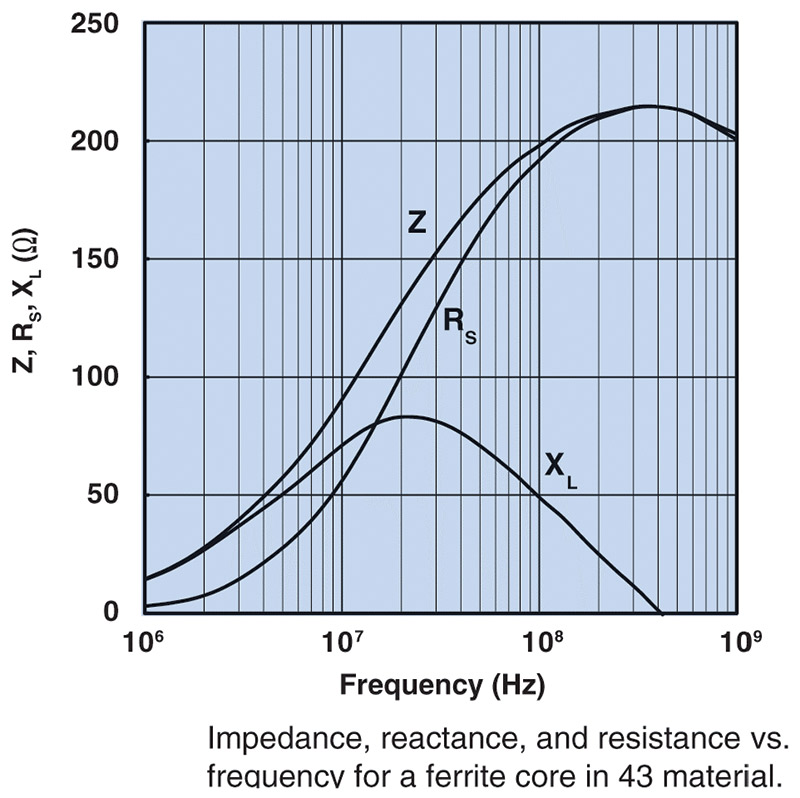 The data-sheet is here:

I have a bunch of FT37-43s ferrite toroids on hand and I need a 100uH
common-mode choke for about 3 MHz, the calculator says about 30 turns
should give me that but I'm unclear if this is an appropriate material

It's the right material for the application.

Too many turns can eventually give diminishing returns due to too much
intra-winding capacitance.

You can work that out.  Sixteen turns on a toroid sounds like a single layer winding, where the parallel capacitance tend to be around 1pF, which would make the coil parallel resonant at about 8MHz (very roughly).

As soon as you start stacking up layers of windings, life gets more difficult and you have to starting thinking about partitioning the winding into successive multilayer chunks, where there isn't a lot of voltage difference within any one chunk.

Very roughly indeed, an octave out - I make 1pF 100uH resonant at 16MHz

I would say an octave is good enough for a SWAG. Even a decade would
pass in most of the cases.

You are right when some information is missing but in this case all the
data was available to calculate better.

I agree with piglet. I'm not in the least pleased with myself.

Oops. I wasn't reading carefully enough. I got quite the wrong inductance, and seem to have plugged in the wrong capacitance too.

Repeating the calculation gives me 15.9MHz - which certainly isn't worth reporting as anything different from 16MHz.

A common mode choke is going to use a bifilar winding, which is to say a length of twisted pair, which has a very well-defined interwinding capacitance, which I'm no longer game to try to work out.

Thanks for the correction .

There is no such thing as material 'Q'.

When you assume subjective properties in
magnetics, you make a fool of you and me.

I think the crossing point is where the resistance is equal to the
reactance. No?

The material itself doesn't have reactance. It does
have a bulk resistivity, but that isn't directly
related to core loss effects, though lossy materials
can often be identified by their low bulk resistance.

"It was my understanding the that the point where u' and u"
cross on apermeability curve is where the material Q = 1."

- Refers to a graph constructed using measurements performed
on a predifined core shape and turns count, as comparative
reference information for the core material in question.
The graphical contents would change with a different core
shape or winding configuration - shifting this specific 'Q'
point, without altering the material composition of the core.

Another common graph is for the single-turn bead, which
attempts to reduce winding effects on measurement of the
loss characteristic. Each bead size and shape will still
have its own curves, without alteration in the core
material type.

Anyone can stipulate that a Q factor exists for the relation
between any two measurable quantities. providing that its
definition is presented within the scope of the work.

In a non-resonant circuit, the term has little meaning,
as losses in the core are (non-linearly) dependent on the
amplitude of the peak flux excursion, and many other
inter-related physical factors of the core and winding.

A lot of instruments to measure inductors and capacitors report Q, by
which they mean the ratio of reactance divided by resistance at the
chosen test frequency, well away from resonance.

As long as they tell you what they're talking about, then
they can call it anything they want.

Q is not a characteristic of the core material.

Perhaps not. But as soon as you put a wire through the hole it has Q at
some point. What good is the core if it not used?

Graphs ARE available for parts under that specific condition,
and for that use.

The OP, however is refering to a graph for 43 matl, and is only
applicable to a 17mmOD /10mmID / 6mmH test speciment with an
unknown number of turna. Fairite, the mfr of 43 matl, doesn't
even bother to offer this part size for sale. It is a lab test
specimen.

The size of the test specimen can vary from one matl data sheet
to the next. None are necessarily commercially-sized parts,
though some manufacturers do use a recognizable part number.

For core material there IS a 'relative loss factor' which is
specified as a maximum limit value at a test frequency.
There ARE graphs for that - check Magnetics Inc matl data.

Many LCR meters report Q as a ratio of reactance divided by resistance.

. . and I'm sure they're very useful in measuring actual components.

If you care to reconstruct the test sample, you might even be able to
replot the graph in the 43 matl's data sheet, given sufficient test
frequencies.

Enough of this foolery.