Report it
currently rated
3 out of 5
(1 ratings)

I've been trying to understand the theory behind the design of the
Ultra-LD 200W Power Amp Mk2 in the Aug 2008 issue of Silicon Chip. The
amp uses On Semiconductor's NJL3281D/NJL1302D ThermalTrak power
transistors. These have integral diodes.

This is the full circuit: 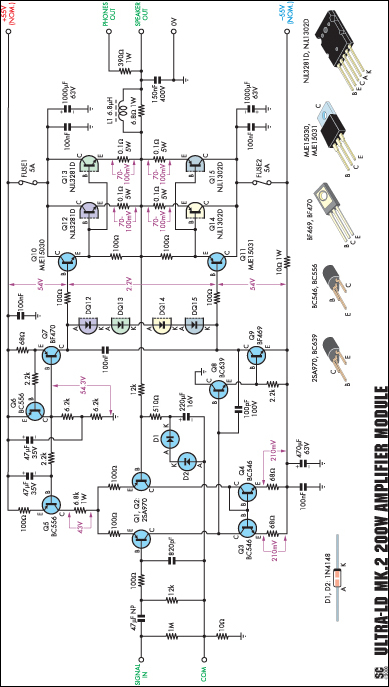 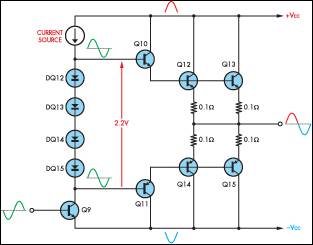 In the absence of an adjustment, how can you guarantee that the
quiescent current settles at a level that is optimum for crossover
distortion and power dissipation purposes? Wouldn't the actual bias
current be highly dependent on the characteristics of Q10 and Q11?
Would a standard Vbe multiplier arrangement where DQ12/DQ13 and
DQ14/DQ15 were wired in parallel (with series resistors ?), and
Q10/Q11 were at ambient temperature, be a better way to do this?
Wouldn't that guarantee optimal thermal tracking, and wouldn't that
allow the amp to be optimally biased?

BTW, the article states that the quiescent voltage across the 0.1 ohm
emitter resistors is 70-100mV. I believe this should be 7-10mV.

** There are two, long proven ways of solving the problem of class B bias
setting.

1.  Use the output BJTs in common emitter mode -  ie with the load connected
to the collectors.

2.  Use no bias at all in the output devices.


Solution  #1 removes the output transistor B-E junction temp from the
equation and the heatsink temp as well, long as the drivers have their own
heatsink.

Solution  #2  is achieved by using drive transistors to cover the first 25mW
or so of output power, then the output devices act purely as current
boosters after that.  This is the preferred way if multiple parallel devices
are used.

Then,  there is the Quad "Current Dumping " method, still covered by patent
AFAIK  -   a neat variation on solution #2 that is just soooooo elegant.

Digital solutions have neither need nor appeal.

That is the way I like to do it.

QSC designs use both methods albeit with a common heatsink. However this leads
to a very non-linear transfer characteristic at low levels, which a Singapore
distributor brought to my attention once.

Yet I've never heard one I liked the sound of.

I've spent ages thinking through suitable alternative protection schemes but if
you do (as you do) need to drive a highly reactive load (which it may be at
certain frequencies only)  it isn't simple. Not by a long way.

All the RMXs for sure. The main output device bias is set just below turn-on,
typically around 500mV. Fairly certain the MXs too.

It was YEARS ago man FFS. I'm just sharing info.

And the drivers do not drive current into the load in any case.

So you are  TOTALLY  WRONG  as bloody usual.

All output  BJTs are biased on.

**  All you are doing is posing  UTTER   BULLSHIT.

I've thought of that using analog circuitry and a multiplier chip.

The thing is though, you CAN exceed the DC safe area quite happily by LOADS for
short periods. That makes it difficult to calculate.

I guess that depends on your definition of difficult, but its the
*entire* point of using a DSP. A second order thermal model is easy, and
should give quite good results. However its not really much more complex
to have a higher order thermal model - think chain matrices, for
example, or cascaded second-order sections

Leo Simpson has told me that the amp design was based closely on this
On Semi application note:

He also says that the September issue will explain how to adjust the
bias to account for variation in the diodes (not Q10/Q11). No trimpot
is used.

That fraudulent document was debunked by me on AAPLS  back in February of
2005  -  when Arny Krueger raised it.

For another,  the text indicates that the bias current in the second version
is  HUGE   -  around  1 amp  per device  !!

(The bias voltage between the bases of Q7 and Q8 was raised by 200mV  -
meaning the idle drop across each 0.1 ohm ballast resistor is raised by
around 100mV too )

So the second version is operating in damn near full class A.

The multi-colour THD curves are  HILARIOUS  !!

Mark Busier sounds like a fake name -  and his article is fake too.

Something doesn't seem quite right about the bias circuit in Fig 1.

As for the biasing circuit, it seems to me that the Vbe multiplier
consisting of Q5 is set for 6 diode drops. Therefore I would think
that for proper thermal tracking, the 6 "diodes" in the multiplier
would need to be matched by 6 PN junctions on the heatsink. AFAICT we
only have 4, namely Q9 and Q14/15/16 and Q10 and Q11/12/13, unless Q7
(MPSA06) and Q8 (MPSA56) are also mounted on the same heatsink.
However, the article is unclear as to the location of the latter. In
fact it is not even clear as to the location of Q9 and Q10. To cloud
matters further, the introduction to the article states that "one of
the major design concerns in the output section of a typical class AB
audio amplifier is output bias and stability over the operating
temperature range. In the past, this was typically accomplished
through the use of a single bias transistor mounted on the amplifier’s
heatsink in close proximity to the output devices."