OT: Greenland is literally cracking apart and flooding the world

What seems to be happening in Greenland is that it's cold and snowy in
the winter, so snow piles up on the ground. Then in summertime, it
gets warm and the snow melts, and the water runs down into the ocean.

I actually had to laugh out loud.  What an f-ing moron!

It's a little more complicated than that. The snow has been piling up for a few years now - the Greenland ice core project pulled out information about the climate over the last 100,000 years.

Antarctic ice is a bit thicker, and the deepest stuff quite  bit older.

The problem is that the ice sheet can slide off in large, thick chunks, and it can do it quite rapidly.

The Greenland ice sheet isn't floating at the moment, but when it slides off it will start floating and displace ocean water.

There's about six metres of global sea level rise, just sitting there, waiting to slide off.

When similar ice sheets have slid of in the past, sea levels have risen quite rapidly. And it might dump enough fresh water in the North Atlantic to turn off the Gulf Stream for a few years.

The last time that happened, at the end of the most recent ice age

The lakes the Fox News is reporting to be draining are feeding water down under the ice sheet - enough of it and the ice sheet will sitting on a nice thick layer of lubricating water, and will slide off into the ocean.

That's a problem that Fox News failed to mention.

It's cold enough year-round for snow to stay on the ground, most places.
There's plenty of room for it to pile up, which is what snow tends to do.

Over the past 20 years it's been net losing. By a lot! 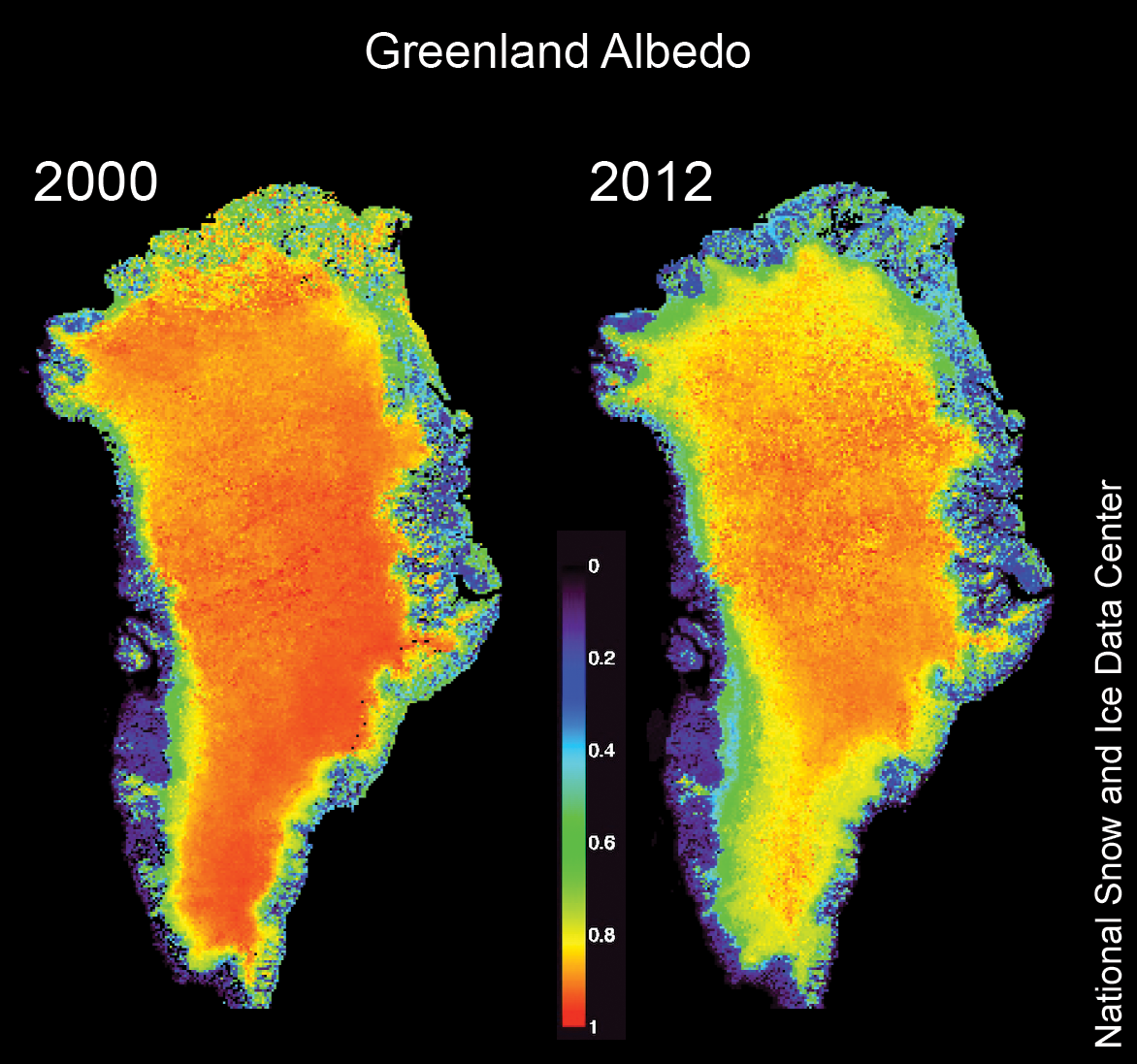 The nice thing about snow that stays around for hundreds or thousands of
years is that they keeps their own records so you can look and compare
to other ice sheets of similar size that existed in history and say
"Okay, so if this loss even just stays static what will the result be"
and it's most reminiscient of the Cordilleran Ice Sheet in western
Canada that was experiencing similar loss rates around 18,000 years ago,
it raised sea levels 20 feet in around 500 years and swamped the land
bridge to Asia.

5 feet of rise is enough to drown out every large coastal city in the
world. So extrapolate that linearly (which is super-optimistic), do the
math on that one and see how long they got best-case if that keeps up.

Don't forget to leave the grandkids some kayaks or canoes in the will.
Gee thanks, Dad.

What's unusual about Greenland is the significant geothermal heat
flux. That melts channels below glaciers and punches holes in
meltwater lakes from below, which can make them drain rapidly.

Nothing new there, but the hot spots do move around.

There a thermal gradient from the centre of the earth out to the whole of t
he earth's surface - Greenland isn't all that special, though it does seem
still have a bit of the extra heat from the magna plume now creating volcan
oes in Iceland.

There are lakes under the Antarctic ice sheet that are heated by the same k
ind of geothermal flux (mostly driven by radioactivity in the rocks of the
core - there aren't lot of unstable isotopes in the core, but there is a lo
t of core, and the heat eventually has to get to the surface).

The last time the earth warmed up a bit - at the end of the last ice age -
lots of ice sheets slid off into the sea, and the sea level went up in fits
and starts.

The Greenland and West Antarctic ice sheets seem to be on the verge of doin
g something similar, in the next century or so.

It's a bit difficult to see what's going on at the bottom of an ice sheet,
so saying exactly when is difficult, but they have been known to move fairl
y quickly when they start moving. The friction between the moving ice sheet
and whatever it's moving over is going to generate extra heat, and melt ev
en more ice just where the melt-water produced is best placed to lubricate
the movement.

I'm 16ft above sea level, I have about 25 yrs left, should I sell now
or will I be gone before I need to worry about a flood?

Sea level has been going up about 2.5 mm per year for at least the
last 100 years and doesn't seem to be accelerating, so you're OK.

You could of course have a flood; nothing new there.


We've slightly trimmed the long signature. Click to see the full one.

That's one way of looking at it. John Larkin gets his thinking on the subje
ct from denialist web sites. There are others, not paid for by people who w
ant to keep on digging up fossil carbon and selling it as fuel as fast as p
ossible.

Extrapolation is the crudest possiblle theory based on data..
We have better ones, that don't have the  "you're OK" feature.

Carbon dioxide additions to the atmosphere were less significant for
the first half of 'the last 100 years', and the sea level curve DOES seem to
be accelerating.

Look at ocean temperatures.  The curves on all the sites are increasing, even
the sceptics. Despite cooling from evaporation, a lot of heat is dumped into
the oceans. It takes minimal observation to figure where this is going.

Re: OT: Greenland is literally cracking apart and flooding the world
wrote:

Our house is 360 feet above sea level, so we don't need to panic very
soon.

But you have to agree ocean temperatures are rising.

What about others who live on the coast.

I can't even be sure of that. Too much instrumentation has been
changed and too much data has been "corrected."

Is that why the beaches are so crowded?

Of course he can't. He believes everything that Anthony Watts tells him - at the behest of the fossil carbon extraction industry - and nothing else.

It's part of the reason. Sea shipping happens to be a cheap way of moving freight around (though not so much cheaper than the alternatives as it used to be), so people do tend to congregate around ports.

Well, technology marches on, and instrumentation SHOULD be changed
every once in a while.   You have to know that, it keeps you in business.

As for dark hints about 'too much data has been corrected' either publish  specifics, or accept
that researchers know how to calibrate.

John Larkin is channelling Anthony Watts, who was a Stevenson box obsessive before he got co-opted by the denialist propaganda machine.

John Larkin is a gullible sucker, who hates admitting that he has been suckered.

Re: OT: Greenland is literally cracking apart and flooding the world
wrote:

I accept that a lot of "researchers" and politicians know how to
calibrate their career paths.

It's really hard to measure temperature to one degree accuracy over
tens, much less hundreds of years, and too much power and money is
involved to trust the approximations.

If you want to worry about the extinction of humanity, in the face of
massive evidence to the contrary, then worry.