I accidentally wound up with an extra set of NiMH batteries and it's
going to be quite a long time before the first set goes South and I need
the second - as in 1-2 years at least.

How would you store that extra set so as to maximize it's
life/availablity?

As they came in the box ?

Or just bite the bullet and figure on them not surviving that long on
the shelf ?

How about swapping them out in the device every couple months?  That might
preserve them.  I think if one is just left sitting, it will go bad.

That's what I do with the AA batteries (ENELOOPs) I use in several
cameras.  Each camera uses 2 of'em, and I mark pairs of batteries with
unique colored bands of magic markers (sharpies).  I keep the pairs
together -- in the cameras, during charging, in storage.  I regularly
rotate the sets via recharging.

"When charging for the first time after long-term
storage, deactivation of reactants may lead to
increased battery voltage and decreased battery
capacity. Restore such batteries to original
performance by repeating several cycles of
charging and discharging."

I guess that explains the "Refresh" button on the SunLabz charger I got
for these things.

It's a rather odd way to describe a unique NiMH phenonmenon.  A brand
new battery will NOT deliver the full rated capacity until after it
has been charge/discharge cycled a few times.  I've been told that
this is also a problem if a used battery has been stored for some
unspecified time.

I attempted to test for this at:
< 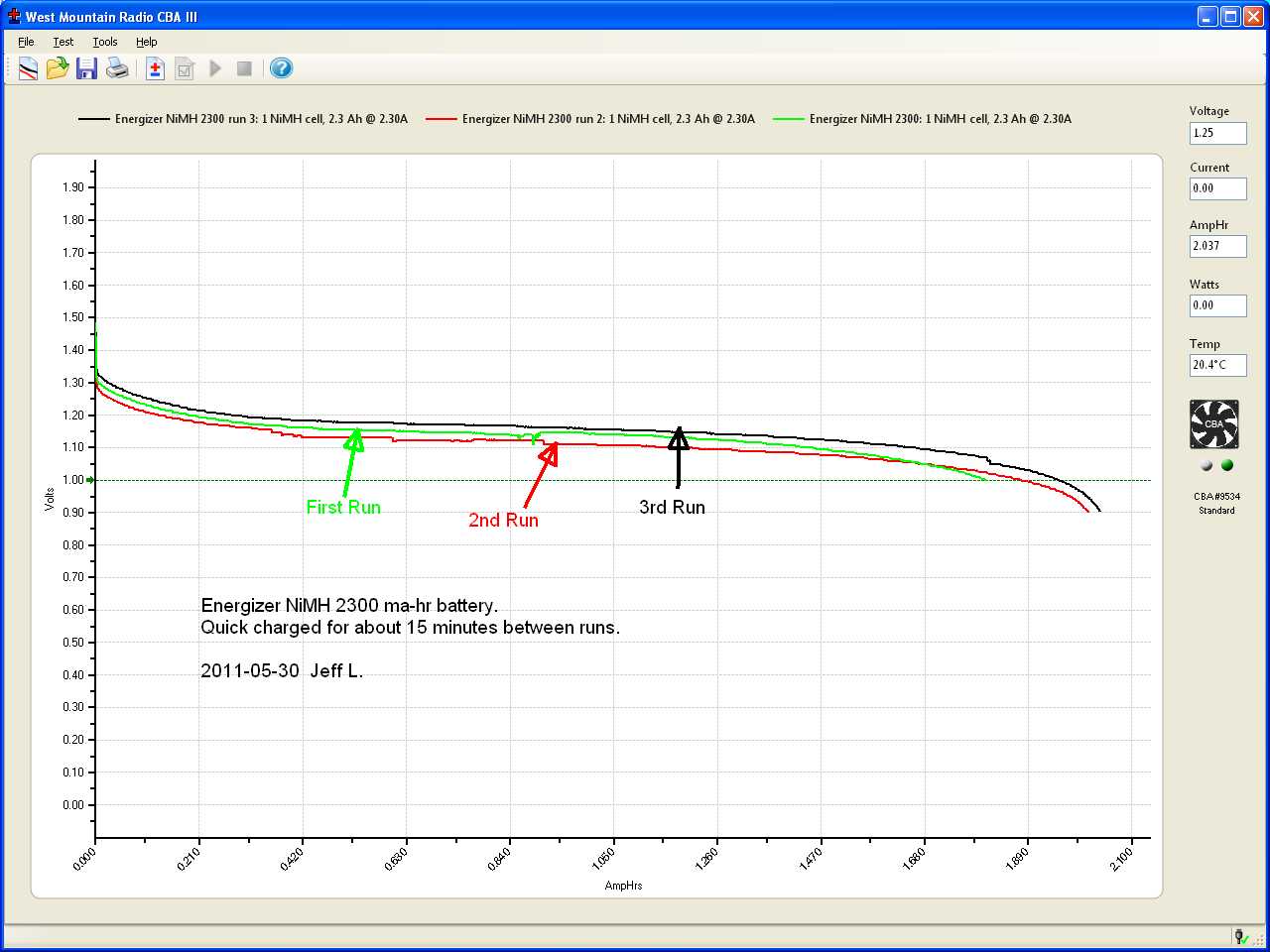 http://802.11junk.com/jeffl/NiMH/Duracelll-NiMH-2050.jpg
Note the increase in capacity after each run.  I didn't bother
checking how many charge/discharge cycles were needed to bring it to
full capacity, but my astute guess(tm) is 3 or 4.  I also haven't
bothered to research the chemistry behind the phenomenon.  I probably
should also test some LSD (low self discharge) NiMH batteries, such as
Eneloop.  I also should get off the computah and do something useful.

I only read about Eneloop after I had ordered these things.

Something like a factor of six or something improvement in
self-discharge..... and I wish I had known beforehand....

Self-discharge seems like the major drawback to NiMH: you need it, you
haven't used it for awhile, and it's not there when  you need it.

I noted a similar phenomenon with the Eneloop (and similar) low-self-
discharge NiMH cells I've bought.  They do benefit from a few
full charge-discharge cycles if they've been sitting around for
a year or so without use.

Yeah, it makes a big difference for "standby" applications.

There's a tradeoff.  The low-self-discharge NiMH cells have a lower
capacity than "standard" ones of the same form-factor.  I've seen
differences of 20-25% in practice.  For high-quality AA cells,
the low-self-discharge ones I've bought tend to top out at
around 2000 mAh, while "standard" versions from the same manufacturer
run up to 2400-2500 or so.

So, if you tend to charge your NiMH cells and then use them
immediately (e.g. taking lots of photographs while on a trip) standard
cells are the way to go.  For "standby" applications, low-self-
discharge cells work out better.

I guess the truly-obsessive could look at a chart of the self-discharge,
note where 20-25% happens, and then choose one or the other type battery
based on one's expectation of how long they will sit before use.

Looks like the crossover point happens after about 20 days and the
regular ones need re-charging on a monthly basis to assure 50% capacity
when needed.

Nickel chemistry might be on the way out, precisely because of self
discharge.

An ever increasing number of cordless devices are appearing on the market
with lithium instead of nickel.

Yep, and there's a problem.  If you charge to 100% and leave it there,
the LiIon battery slowly deteriorates.  See Fig 5 at:
<http://batteryuniversity.com/learn/article/how_to_prolong_lithium_based_batteries
That's one reason you don't see any LiIon UPS/SPS battery backup power
system.  There are plenty of retrofit kits and replacement batteries,
but nothing from the OEM's.  Same with cordless phones, electric
shavers, and other devices that run permanently on chargers.  About
the only way to do it is to use a battery that's about twice the
calculated capacity ma-hr, and only charge it to 50% of capacity.

When we were doing Li-Ion capacity/cycling testing (in association
with charger design) we tried moving from the cell manufacturer's
"specified terminating voltage for full spec capacity" (4v20) to 4v10.

We found that we were achieving between 85% and 90% of the 4v20
capacity.  We didn't have enough lifetime to waste doing deterioration
testing for 4v10, but I'm sure that the average always-plugged-in
laptop would get double the battery lifetime (cycles, years) at 4v10
terminating voltage with only that commensurate loss of run time.

It's a pity manufacturers of laptops, smartphones etc are obsessed
with maximising run-time as a selling spec.

Well...offer a laptop with less battery life than the competition
and see what happens to your market share.
It's not manufacturers, it's customers who are obsessed with run-time.
If you're gonna get a new smartphone every two years, do you really
want to trade run-time for a battery that lasts 10 years instead of three?

What would be interesting is a customer available parameter that
traded battery life for run-time.

So, what was the termination voltage in your final charger design?

Maybe I should have said manufacturers were obsessed with remaining
competitive ...

Jumper-selectable 4v10 and 4v20 (solder-blob bridge on the PCB - the
design was for a large battery supply house).  That way the vendor
could tailor it to the customer application - which was NOT commodity
appliances.

ISTR: earlier generations of cells requiring 4.10V, most current types like
4.20V - I recently encountered a cell type that should be charged to 4.30V.
The graph on the datasheet indicates useable capacity takes quite a hit if
you only charge it to 4.20V.

The current "solution" is for laptops to offer a mode where it charges
to about 50% of capacity for those that use laptop as a desktop
replacement, where it is plugged into a charger 100% of the time.  If
you want to go somewhere, you're expected to change the setting and
quickly charge the battery to 100%.  Of course, the setting is buried
under several layers of menus in an obscure utility only accessible if
you know the cryptic name and obscure location.  I also note that this
feature seems to be more common on laptops with non-replaceable
batteries (Aerobooks and Ultrabooks).


Yep, the rest go with the full SOC, give you the big run-time spec,
and sell you replacements (batteries, or - more often- machines).

As someone else suggested - rotate them in use.

Nickel batteries thrive on use, it was certainly the case with cadmium -
probably less so with Mh.

Even the allegedly low self discharge types self discharge, so they'll end
up flat in storage wherever they start off from, I have a suspicion that
stored fully charged may be more prone to whisker shorts.

A while back, the Lidl discount store had "ready to use" Ni-Mh cells, so I
bought a load. A pair of cells fresh out of the charger for my camera,
lasted just long enough to charge the flash - then the camera shut down with
low battery warning. Rotating the cells through other uses has improved
their performance.